The table and figure below summarize the plant's electricity production to date, based on the most recent update from TVA. TVA has been reluctant to provide detailed information about the performance of their wind power plant, but some information is slowly accumulating. Recently performance has been improving, which is probably why they released more results after only 2 months.

Repeated Comment: TVA should provide detailed data similar to what the Wisconsin Wind Project provides for a couple similar size turbines, or what TVA provides for their own solar stations (scroll down to see plots at both sites). The Wisconsin Wind Project also provides data on electric power consumed by the equipment. While the 6-10 kw consumption is small relative to rated power (~600 kw), it does remind us that the wind power plant relies on conventional power sources providing "extra" power when the wind is not blowing hard. This also reminds us that TVA's updates are not precise about their reported "generation." Is it gross or net?

Just in time for Earth Day celebrations, TVA finally announced a reduction of their goal for annual energy production.  The new goal is 4.6 million kilowatt-hours per year, down from 6 million .  Thus, it now appears that the initial goal was 30% too high (1.4/4.6), or required a decrease of 23% (1.4/6.0), depending on how you want to do the math.  The fact that in about 16 months they only produced about 4.8 million kwh was a clear sign. Now they only need to average about 27% capacity factor to achieve the new goal, down from about 34%.  TVA minimized the significance of the change, saying,

"The wind farm has generated 4.8 million kilowatt-hours since its fall 2000 start-up, somewhat less than projected but still a good showing for the plant’s initial shakedown period. Minor start-up problems have been addressed, and work has been completed on communications equipment that will allow better management and operational control.

Although initial output has been less than anticipated, the wind turbines have functioned extremely well and have been available for production 95 percent of the time since April 2001. Gusty wind conditions and delays in the delivery of replacement parts have been the primary causes of lost production.

Wind-speed variation at the site can be extreme, with wind speeds changing from less than 10 mph to more than 35 mph within a single second and bursts of up to 70 to 100 miles per hour. Under these conditions, sensors cause the wind turbines to go offline, and they have to be manually inspected before they can be returned to service.

Wind measurements continue to be recorded at the Buffalo Mountain site. Additional data will be gathered over the next several years to help improve the accuracy of long-term projections on wind resources in the region. Based on data from the first year of operations, the production output is expected to be 4.6 million kilowatt-hours of electricity each year."

These recent statements contrast with what TVA said previously on their web site:


"How are wind sites selected?
The turbines must be situated where the wind is relatively steady and strong."

One would also think they should have been aware of these problematic, gusty conditions, because in the Environmental Assessment for expanding the size of the power plant by about a factor of 10 (chaper 3, page 3-1) they wrote:

"TVA monitored wind conditions at Windrock Mountain, about a mile south of the Buffalo Mountain Windfarm, for 3 years during the mid-1980s and again during the mid-1990s. Wind conditions have also been monitored at the Buffalo Mountain Windfarm [sic, it's not a farm; it's a power plant] since May, 2000. Average monthly wind speeds at a height of 164 feet (50 m) varied from a low of 9.8 mph (4.4 m/s) in August 2001 to a high of 17.4 mph (7.8 m/s) in February 2001. The predominant winds, in terms of both time and energy, are from the southwest and south-southwest. Based on the results of this monitoring, TVA classifies the wind resource on Buffalo Mountain as high class 3 or low class 4. Class 4 sites typically have mean wind speeds of 15.7 to 16.8 mph (7.0 to 7.5 m/s)."

In the most recent two months, TVA produced about 0.9 million kilowatt-hours, for a two-month average capacity factor of about 33%! This raises the overall capacity factor so far to about 21%, which is still below the new goal (27%).

In the latest performance table I've taken 19 days off the count of "days since start" to be more consistent with TVA's stated "operational date" of November 1, 2000.  This also increases the capacity factor values by 1-2 percent, and decreases the theoretical capacity values by about a 900,000 kwh, give or take.  What's a million kwh among friends anyway?  Only about $26,000 in bonus Greenbacks for TVA (Green premium of about $0.026 per kwh x 1,000,000 kwh). 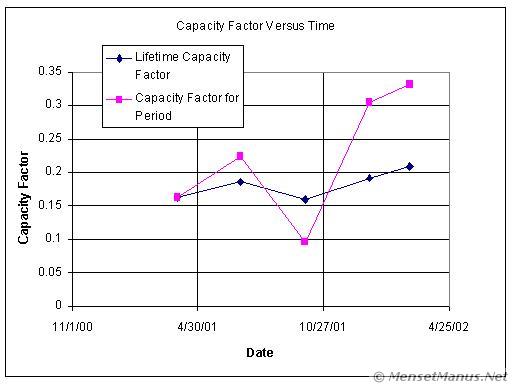 Images stored locally for protection of your privacy (unless/until you search with Google).

Disclaimer Fine Print: This site is personal, and is independent of TVA or any other organization. Use of the abbreviation "TVA" is purely for descriptive purposes (for example, to distinguish from wind power plants on Buffalo Ridge in Minnesota). No endorsement, no approval, and no involvement by TVA is implied.